East Mediterranean Gas: The Fall of the Corridor and the Rise of a Hope Pipeline 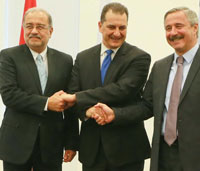 For the last few years, Israel, Turkey and a number of European countries led an aggressive campaign to define the so called Eastern Mediterranean Energy Corridor: a strategic system for securing East Mediterranean gas supply to Europe. The emergence of the Arab spring in the beginning of 2011, created an environment where Egypt was totally excluded from the East Med Energy equation paving the way for Turkey, Cyprus and Israel to associate themselves with the concept of the Eastern Mediterranean Energy Corridor and for Turkey to redefine its energy transit role in view of the uncertainty related to natural gas supply from Russia.

The Fall of the East Mediterranean Gas Corridor?

The New Egypt suddenly emerged to claim back its position as a key player in the Eastern Mediterranean Energy scene. Egypt and Cyprus Agreed on Joint Development of Natural Gas Resources. However, not everyone was happy about this rapprochement.

The use of the gas is a point of heated dispute between Cyprus and Turkey. Turkey claims that Cyprus-Egypt Exclusive Economic Zones (EEZ) boundary agreement ignores Turkeyĺs continental shelf rights in almost all of the Western EEZ area and partially overlaps Blocks 1, 4, 5, 6 and 7. As a result, Turkish Petroleum Corporation (TPAO) has been given the green light by the Turkish government to explore in the above-mentioned EEZ areas which fall either partly or wholly within the EEZ and continental shelf of Cyprus.

During the last few months, different entities teamed up to resume a mass deception campaign across local Egyptian media. This campaign was first introduced during Morsi presidency in 2012 to convince simple people that Cyprus is stealing their natural resources and that Egypt is losing trillions of dollars as a result. To accomplish this goal, a number of highly educated individuals were chosen to give credibility to some unrealistic historical content and to spread the message across multiple media channels, but the strategy didn't work.

On September 11th, the government of Egypt decided to clarify the Egyptian official position and to put an end to rumors. Al-Sisi issued a presidential decree that ratifies the previously signed framework agreement between Egypt and Cyprus on the joint exploitation of hydrocarbon reserves, on the median line between the two countriesĺ Exclusive Economic Zones (EEZ).

To make its point, Turkey has dispatched a warship-escorted seismic vessel to conduct seismic prospecting in concessions where Cyprus has already licensed companies to drill. On November 25th, the Turkish prime minister, Ahmed Davutoglu stated ôThey should know that if they try to explore for Oil and Gas south of Cyprus we will not allow this,ö The recent sequence of events put a clear end to the so called East Mediterranean Gas Corridor.

The Rise of the Hope Pipeline

The "Egypt Gas Puzzle" series was created by Gulfoilandgas.com to highlight the geopolitics of Egyptian Natural Gas development and to document a revisited strategy for monetizing gas discoveries in the Eastern Mediterranean that includes the new Egypt. Reversing the Flow article was published on April 2nd, 2014, to explain how can Egypt's idle gas export infrastructure realize the energy security needs of Egypt and the region. It also suggested the most economic way for monetizing new gas discoveries offshore Cyprus via the "Hope pipeline".

On November 25th, at a tripartite Egyptian-Cypriot-Greek meeting in Cyprus, the plan for a New Gas Pipeline from Cyprus to LNG plants in Egypt was announced. The move echoed Gulfoilandgas.com proposed strategy earlier this year, which described how Cyprus could send natural gas from its Aphrodite field (Block 12) by a 180 km undersea pipeline to the Damietta LNG plant in Egypt. The new pipeline shall help in diversifying sources and routes.

The recent political developments in East-Med confirm our views concerning the strategic importance of the rapprochement between Cyprus and Egypt. The inclusion of Egypt in strategic gas deals with Cyprus shall improve the energy security situation for Europe. For Egyptians, such deal shall alleviate national security concerns, decrease financial risks, and improve energy security. Now, with the New Egypt back to the scene, it looks like there are other inclusive alternatives for regional cooperation in the Eastern Mediterranean broader than the ôCorridorö.