Minister of Petroleum in Discussions with CEO of ENAP Sipetrol 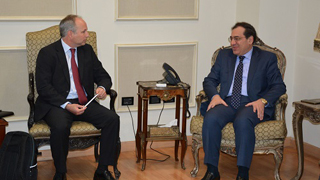 The CEO of ENAP Sipetrol declared that the company has a strong desire to expand investments in Egypt in Oil & Gas domains during the coming period.

The Minister pointed out that they reviewed the Government’s economic reform program and methods of creating an investment-attracting environment, as well as latest developments in the Egyptian Petroleum Industry.