Minister of Petroleum talks with the CEO of Apache 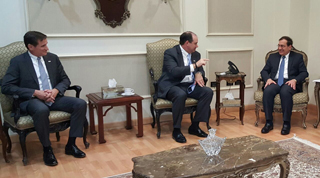 During the meeting, they discussed means of developing and expanding Apache’s exploration activities in Egypt. Also, they reviewed the company’s current work status and targeted investments’ plans over the coming years in the exploration and production domain, particularly in the Western Desert area.

The Minister asserted on the Ministry’s interest in increasing the American oil companies’ investments in Egypt which is considered the corner stone of developing American Investments in the Egyptian economy. The Minister referred to the current visit of President Abdel Fatah El Sisi to the US, which will contribute to opening wide horizons in the economic relations and partnership between the two countries at all levels and in Oil & Gas industry, in particular.

For his part, the CEO of Apache clarified that the company achieved distinct success and results since 1996, marking its operation start up in Egypt. He pointed out that Apache’s success in Egypt is considered a model, which the company is proud of. Furthermore, he said that Apache’s investments during this period reached more than $17 billion with 25 concession areas, 2 of which were awarded recently, in the EGPC Bid-Round.