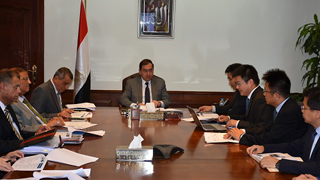 Eng. Tarek El Molla, Minister of Petroleum and Mineral Resources received the General Manager of China Development Bank (CDB) and the accompanying delegation, where they discussed cooperation and partnership in new petroleum projects as well as financing oil and gas activities. the meeting was attended by the Ministry’s First Undersecretaries and CEO of EGPC along with EGPC’s deputies for Financial and Economic Affairs, Planning & Projects.

During the meeting, the Minister asserted on Egypt’s keenness on strengthening economic ties with China especially in the Petroleum Industry domain.

The Chinese side expressed their willingness to finance oil and gas projects according to its Economic feasibility.

On his behalf, The GM of Chinese Bank clarified that strengthening of economic ties with Egypt, especially in the Petroleum Domain, comes as a priority for the bank, which has, recently, opened a new branch in Egypt.

During the meeting, they reviewed current Chinese companies projects’ activities such as, through its joint venture Sino-Tharwa, in addition to its participation in upstream activities of APACHE’s Western Desert concession area .