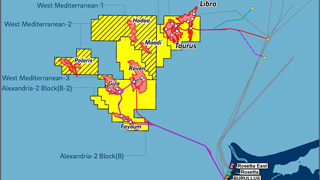 During the inauguration, Eng. Tarek El Molla, Minister of Petroleum and Mineral Resources asserted that the current year will witness a significant boost in natural gas production from the newly discovered fields currently, being developed, particularly, those in the Mediterranean, Nile Delta and the Western Desert. The Minister clarified that the Ministry’s strategy targets increasing Egypt’s natural gas production levels, gradually, in the frame of the country’s plan of securing energy supply and fulfilling the requirements of all the State’s economic sectors.

The Minister highlighted the most crucial challenges of the project and clarified that the project includes the agreements of North Alexandria and West Mediterranean deep-water areas, due to the proximity of the 2 areas, thus, a unified plan was set for both areas in a project called West Nile Delta gas production in order to achieve better economic gains than developing each area individually. The partners in both agreements are British Petroleum (BP) and the German company Dea-AG, with total investments of $9 billion.