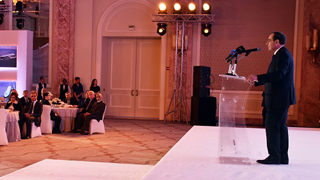 During a meeting organized by Shell on the occasion of final installment payment of EDCO liquefaction plant project, Eng. Tarek El Molla, Minister of Petroleum and Mineral Resources clarified that EDCO gas liquefaction plant, which started operation in 2005, is considered one of huge LNG facilities, that was built worldwide at a low cost at the time (about $2 Billion) while its value today is 5 times more than its original cost.

Also, it is considered one of the most important gas liquefaction projects in the world and a model of successful partnership between the Petroleum Sector and foreign partners. He added that the economic return of the project will grow during the coming period in addition to the Petroleum Sector oil and gas development plans.

The meeting was attended by leaders of the Petroleum Sector in addition to Eng. Sami Iskander, Executive Vice President of Shell and Eng. Gasser Hanter, CEO of Shell Egypt as well as CEOs of International Companies participating in the project.