Petroleum Minister Meeting with the French Chamber of Commerce and Industry 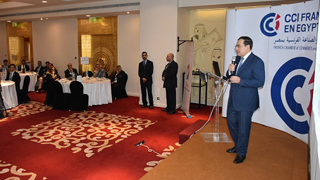 Eng. Tarek El Molla, Minister of Petroleum and Mineral Resources announced that 2018 will witness revealing the Petroleum Ministry’s new strategy for developing Mineral Resources, in the framework of Egypt’s Orientation of maximizing value-added of mineral resources in favor of the Egyptian Economy and to revive its role as a main pillar of national income.

The announcement came during the Minister's meeting with members of the French Chamber of Commerce and Industry in Egypt with the presence of the French Ambassador to Egypt, Mr. Stefan Roumtier and a number of the Petroleum Sector’s leaderships and representatives of French Companies. The Minister reviewed challenges the Petroleum Sector experienced during the last few years and succeeded in overcoming most of them ,as well as reviewing work plans for the coming period.

The Minister added that Egypt is serious in its desire of transforming into a Regional Energy Hub , that the Sector is well aware that the exquisite geographical location is not the only factor to achieve such a strategic goal and must be conveyed with comprehensive upgrades of infrastructure, Gas Grids, Pipelines, Storage Facilities, terminals, Liquefaction Plants and Refineries ,which the Sector is already executing with a fast work pace. He pointed out that Egypt possess such infrastructure and is making huge efforts in upgrading them in order to meet the aspirations of countries aspiring to rely on Egypt as an Energy Hub.

The Minister said that the Government gives utmost priority for value-added industries for its huge effect on economy in which the Petroleum Sector contributes to the Petrochemical industry, which will witness a strong breakthrough in the coming period through projects planned to start up that will produce high quality products capable of competing globally. He asserted that the Sector aims at reinforcing its contribution as an engine to economic growth in Egypt and to be a role model for the Country’s other Sectors through the Petroleum Sector Modernization Project, currently in the implementation phase, which aims at enhancing all the Sector’s work areas to meet International standards.

The Minister pointed out that IOC’s confidence in Egypt is not out of nowhere, as they sensed a sincere desire from the Egyptian Government in Economic Reforms and fulfilling their commitments which were clearly showed in IOCs continuity in pumping more investments as well as interest in new projects and concession areas offered through bid-rounds. He added that the Sector signed a total of 83 upstream agreements since the 30 of June 2013 revolution until now, which is considered a record in the history of the Egyptian Petroleum Industry. He also added that the Government has eyes set on the principles of Social Justice and that the Sector contributes in achieving it through the Households Natural Gas Connection Project which aims at connecting small towns and remote villages with natural gas, signaling that expanding the project will achieve real savings from amounts of subsidies directed to LPG cylinders in the State’s Budget, considering its high production cost.

From his side, Mr. Mahmoud al Kaissi, Head of the Chamber, praised the efforts exerted to overcome challenges that faced the Petroleum Sector in the last couple of years and achievements fulfilled in reality especially the maritime border demarcation that paved the way for uncovering the Red Sea potential for the first time. He added that French Companies aspire to invest and work in this promising area.